The Birth of ActiGraphy

During exploratory discussions with potential clients, a question that frequently comes up is whether actigraphy devices are safe for use on young children and infants. Not only is the answer yes, but in fact, some of the earliest known research involving the use of mechanical motion-sensing technology was conducted on infants. In the early twentieth century, an Austrian biologist named J.S. Szymanski developed actimetric devices to study 24-hour sleep-wake patterns in animals and human infants.1 The figure below shows one of Szymanski’s original sketches with an infant sleeping in a bed connected to his experimental device. 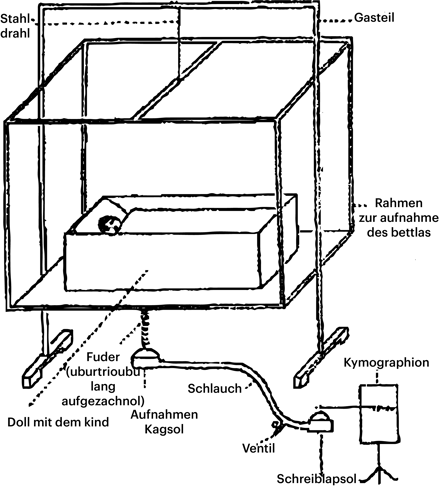 Szymanski’s experimental methods served as a springboard for additional research, but the miniaturized actigraphy devices we know today did not become readily available until the 1980s. Another great breakthrough occurred in the 1990s when a team of scientists led by Dr. Avi Sadeh demonstrated a 91-93% correlation between wrist based actigraphy data and polysomnography scores.2  In 1995, the Board of Directors of the American Sleep Disorders Association (now known as the American Academy of Sleep Medicine) endorsed a report by Dr. Sadeh and another well-known sleep researcher, Dr. Daniel Kripke, on the validity of actigraphy in assessing sleep-wake patterns in all age groups from infancy to elderly.3 From that point forward, actigraphy became widely recognized as a reliable and cost effective method of capturing activity patterns during sleep periods in younger populations. Currently, research groups are required to perform risk mitigation for skin sensitivity and choking hazards in their studies, and research continues to show a high correlation between actigraphy and polysomnography in infants. Actigraphy is still widely used across all age groups, and the technology and science surrounding it continues to advance. This will almost certainly lead to further innovation in the methods of passively and objectively capturing the human body’s ability to move and sleep.

Bridging the Knowledge Gap on Digital Clinical Measures: A Technology Partner’s Perspective on ‘The Playbook’

ActiGraph was one of the very first commercial providers of wearable motion-sensing technology,...
Read More

Paving the Way for Virtual Trials in Neurology: A Fully Remote ALS Study in 2015

The COVID-19 pandemic has completely changed the way we think about clinical research and care....
Read More

Oncology is one of the most active and fastest growing areas of drug development research,...
Read More